It has been really cold outside, not so sunny and time to holiday. The trees have been coated with ice so two days now and all the roads are littered with broken branches. It was the storm of the year! And just in time for Christmas … 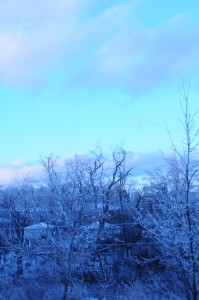 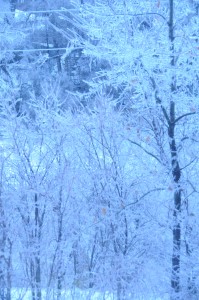 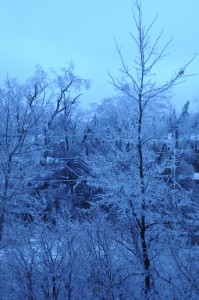 Thanksgiving Weekend! We, the three people in the car, were at Nova Scotia. It was dark when we got there: an hour and a half  trip to Halifax to Wolfville. We got a bed and breakfast and then we started out for Barb and Bill’s place, Hayley’s parents, where we were to have dinner. There were nine people from out of town and four from Nova Scotia!

The next day, our wine tour started. The was Blomidon Estates. It was quite a nice day. We walked for a while to see the wine growing, the hills and the Estate. 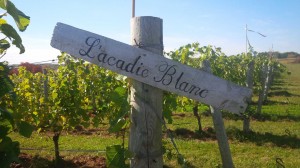 We also went to Hall’s Harbour to see the tide coming/going. It was sunny and warm.

On the way back to the the airport, we went to a winery which was in a church – very special.

October 1st was here. It’s fall now. I’m sitting in my office here watching leaves drop off the tree and float around until they are buried in the landscape … brown ones, yellow ones and red ones.

The tree outside is dying now and last year in fall in used to be bright yellow. I think it’s that disease that plagues all ashes. In the spring, it only got half its leaves … and now it’s bare. I miss it right outside my window!

I went to see ‘RUSH’, the Formula One drivers, two of them, that competed in the 1976 Championship. Niki Lauda was driving a Ferrari and James Hunt driving a McLaren and the two battled it out on the racetrack. In Nurburgring there was a fiery accident … and one driver almost died but it was a miraculous recovery that led both teams to fight it out in the end. It was a really good movie. Ron Howard directed it and he seems to know something about racing …

After we did that, we went out for dinner at Tabule Middle Eastern Restaurant at Yonge and Davisville. It was a beautiful summer night and we sat out on the patio. The server that we had was terrific and funny: we had him a couple of weeks ago and it was magic tonight.

About the end of dinner, it rained and we were coming inside. We were seated and, again, we had a birthday party to attend to. It wasn’t our birthday … but 20 people from the birthday party were up there shimmying to the music. The belly dancer had showed up and all was chaos.

It was a nice night! 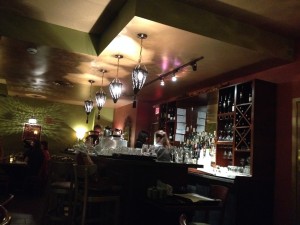 I have been to Chicago, Illinios for four days in August 2013 …

This city is packed full of marvellous architecture… and people going about their business.

The Wrigley building – designed by the architectural firm of Graham, Anderson, Probst & White using the shape of the Giralda tower of Seville’s Cathedral combined with French Renaissance details and the work of Frank Lloyd Wright, architect and interior designer who lived in Chicago and designed many of the buildings here.

OK!! So it’s August … I haven’t written lately. But I know you’re going to be interested in this one!

I was on a Helicopter Tour flying over Toronto. I was in a little four-seater helicopter with me and the pilot.  He radioed to control, and “OK” was the answer and he just put the helicopter up-p-p-p … and I’m flying!

Check out the pictures … 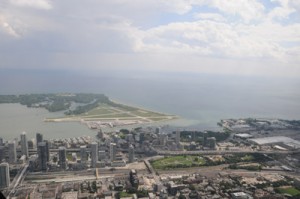 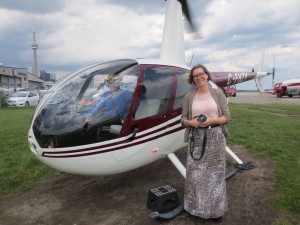 Well, it’s not spring … The temperature is at 0 degrees and it’s going to about +1 degree at the end of the day. But the sun is shining and it LOOKS like a good day to go out!

It’s the Monday of the long Easter weekend and, believe it or not, I’ve got to write at least 2 days before the end of the week so you can join me as I ponder life!

I fed Rory’s rabbit this weekend and came across Crocuses in his yard.  The sun was shining and it felt like SPRING! 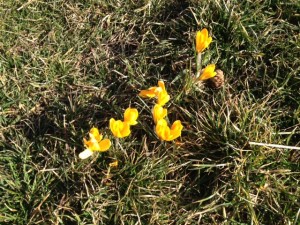 Well, really I haven’t moved but I put my condo apartment up for sale … It empty at the moment. I’ve taken away the books (Goodwill) and I’ve got the furniture picked up by Furniture Bank … I’ve arranged for the guy to do the painting, got installers to put the hardwood floors down and the cleaning is done. It’s taken me 4 months to do this but … whatever!

On Friday, Amy the real estate agent came over and we signed all the papers and decided on the price. I’ve sold three properties of mine in the past but this has required so much planning. I suppose the other properties were in London not Toronto – and I want the best price I can for the condo.

The Guitar Society of Toronto, founded in 1956, put on a concert Sunday late afternoon in the Briton House Recital Hall on Mt Pleasant Road. It was a Holiday Recital.

The next part of the concert was individual classical guitar music.  Steve Shorter preformed the Danza Pomposa and Frank Forde did the Spanish Romance. Heather Morand Clark preformed the Sakura Variations and Julia Florida – Barcarola was done by Andre Carlos Amaral. Finally, Prelude no 1 and Venezuelan were preformed by Timothy Beattie.

Right after the intermission, David Sossa Fernandez and Lindsay Jones were preforming a duet of Theme and Variations, op. 18 by Johannes Brahms.

The next part of the concert was performed by all of the Guitar Society Orchestra led by Rob MacDonald as the conductor. The Aria, from Goldberg Variations by Johannes Sebastian Bach which was arranged by Steve Shorter was one of my favourites. Conventry Carol was next and the Carol of the Bells were after that. Frederico Moreno Torroba was the final step in this orchestra as La Siega, Amancer and Camino del Molino were performed.

It was festive, and definitely worth listening too …

The Amaryllis is fastastic – growing super large flowers!  And the second sprout is almost as tall as the big one. Bea-u-tiful! 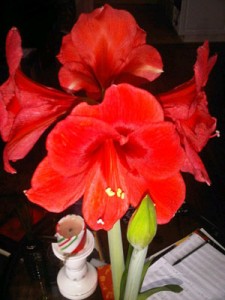